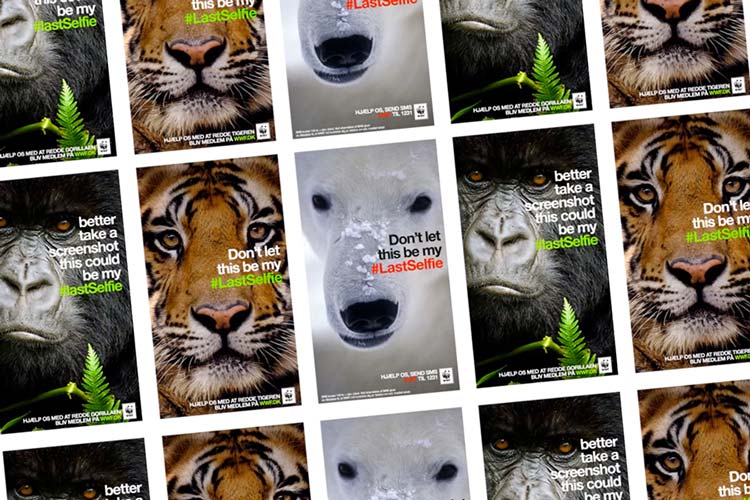 From WWF’s #LastSelfie movement to O2 Priority look at the best digital marketing campaigns of 2015.

The World Wildlife Fund wanted to create a campaign that would not only get people talking in the digital sphere and help raise awareness, but would lead to concrete donations and animal ‘adoptions’ via their site. They did this using the appeal of animals with the viral nature of selfies.

With agency 4129Grey they created the #LastSelfie campaign and sent SnapChat pictures of animals classified as ‘endangered’ to all WWF’s followers on that medium.

Each SnapChat fed the idea that it could be that animal’s last time to be photographed, before urging viewers to take a screenshot of the image. The success may have surpassed their expectations.

That afternoon, thousands of tweets of the campaign were seen across 6 million Twitter timelines. Over the course of a week, 120 million Twitter users were witness to the #LastSelfie movement, meaning half of all the platform’s users were reached.

Now that is a successful digital campaign.

Spray deodorant company Axe put digital to use in an IoT masterclass campaign in the heart of Turkey.

With advertising agency J. Walter Thompson Manajans, they set up a soundproof box on a busy street and had famous Turkish bands play concerts, for free, for passer-bys.

The catch was, of course, no one could hear them. To do so, the public had to connect to the Axe Black Wi-Fi, which did two things – enabled users to listen to the concert but also shut off their social media accounts.

The campaign was based off the idea that we are constantly surrounded by noise – and boy did they create noise online following the concerts. Millions of people tweeted about the performances, and the Axe Black product became the company’s best selling line during that period.

Priority is O2’s digital membership app for customers, and provides a fantastic opportunity for the company to engage with customers both dormant and aware. But this year saw them expand their offerings, and use the philosophy of the IoT to reach more people.

Priority basically lets consumers access deals on a daily basis, and O2 broadened this earlier in the year to include further partners including Boots UK and other high street brands.

Boots, for example, allowed users of Priority to buy £1 lunches on Mondays.

Through the mixing of mobile app technology and TV advertising, the telecommunication brand reached new audiences and re-engaged with inactive users.

It’s important to note that ‘Digital’ need not be an elitist reference to pure, cutting edge and innovative IoT-based campaigns. Digital can refer to almost anything to do with, well, digital, and as such a viral video is as good as an app.

After that, there’s really not too much to say about this campaign aside from the fact that it actually began in late 2014. However, it hit its stride in 2015 so deserves a mention.

It really is a classic case of putting some relevant and poignant content together and letting society do the rest.

Diageo, the drinks company, partnered with Nick Offerman to make a 45-minute video of the latter sitting in a chair, in front of a fire, silently drinking one of the brand’s whiskeys.

This has been viewed millions of times and, if I dare say so, makes me wish to be in his place.

Whilst these campaigns are not few and far between, having come fairly commonplace of late, it’s worth mentioning at least one of them in this sort of list because it plays a major part in how digital advertising progresses. So we’ll look at one of the big ones. 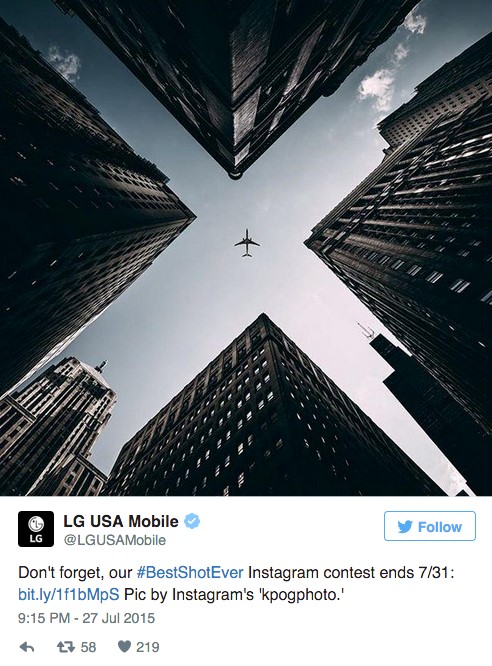 LG started their very first #BestShotEver Instagram competition, offering people the chance of a holiday to New York if they helped the brand prove the quality of the new phone’s camera (on the LG G4S).

The competition attracted some cracking entries from thousands of entrants, helping to raise awareness of the firm’s improvement in what is a flooded – and yet monopolised – field.

Short of innovative, but relevant for its target-awareness.

Perhaps not a company all of us had heard of before, this relatively new banking branch made waves with it’s ‘No, thank YOU’ campaign in July this year. 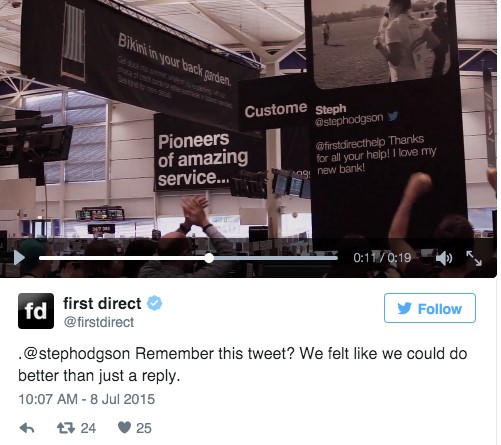 Following receipt of what they said was a lot of good feedback from customers, First Direct decided to go a step further than just thanking people for their feedback. Instead, they printed their messages of support on giant banners, hung them up in their offices, and filmed the staff cheering and applauding.

These clips were then shared on social media. It’s fair to say that this brilliant combination of customer-centric advertising with both print and digital worlds garnered a lot of good vibes from consumers.

Along with London agency WCRS, Women’s Aid launched a DOOH (Digital Out Of Home) billboard campaign that won awards for its ingenuity and use of the digital world.

Aiming to make the point that just one person needs to stop and take notice in order to help victims of domestic violence, these high-tech billboards actually change image depending on how many people are looking at the sign.

A camera perched atop the frame uses facial recognition technology to work out how many people are observing the image, and as more and more people look, the bruises on the subjects face begin to disappear.

On top of this, those within close proximity (who are signed up to communications app Weve) receive a text message prompting them to support the cause.

This amazing use of technology with traditional media is a sign of the times – both for print and digital – and is a hail to a renewed age of creativity and innovation in marketing that many have felt is disappearing in the data-led world in which we live.

How Much Does a Website Cost? The Ultimate Pricing Guide

What Does a Digital Marketing Manager Do?

How to Become a Social Media Manager